I went down to the Dirty Show for the Sunday show during the day. The day show is more like an exhibition since it lacks the stage acts and other performances.

The gallery was set up pretty much the same way as last year like a large “L” only the stage was flipped from one side of the long part of the “L” to the other.

My piece “Water” was all the way round past the corner to the toe of the “L”. In addition to the walls they also had a couple of free standing presentation partition walls arranged in “S” formations. Art adorns both sides of the “S” formation. My piece is on the bottom outside edge of the formation.

As you can see I got the spot… Generally that means the painting has sold. I say generally because I haven’t got the official email saying don’t come down next Sunday to pick it back up and oh the check is in the mail.

Sharing the partition wall with my image are ” Her Shadow” and “pre-packaged Domme”. Which seems more of fit than last years “obfuscate” or as I liked to call it “Mr Meaty and his padlock.

I spent a couple of hours going around checking out the other art. One of my favorites has to be “Moab Parks & Recreation” from straight on it looks like a picture of a stone arch.

I walked right up to the picture because it seemed so out of place. I was thinking there must be something in the detail that I was missing. As I stepped closer I found out the image was lenticular and if I moved and looked at it from the side it was actually a reclining male nude with a strategically pose rock formation.

I seriously laughed out loud.

As to the other art on the walls it ran from the extreme and graphic to the subtle and thought provoking.

By the way it’s not a picture of a bunch of Calla lilies ;0)

Some of the art I understood but some didn’t quite register as artistic or needed but that is the whole point of an analog perception of art. It’s not a case of good and bad or black and white but rather shades and hues.

My favorite image from the show is “Eve” by Andrew Monroe. 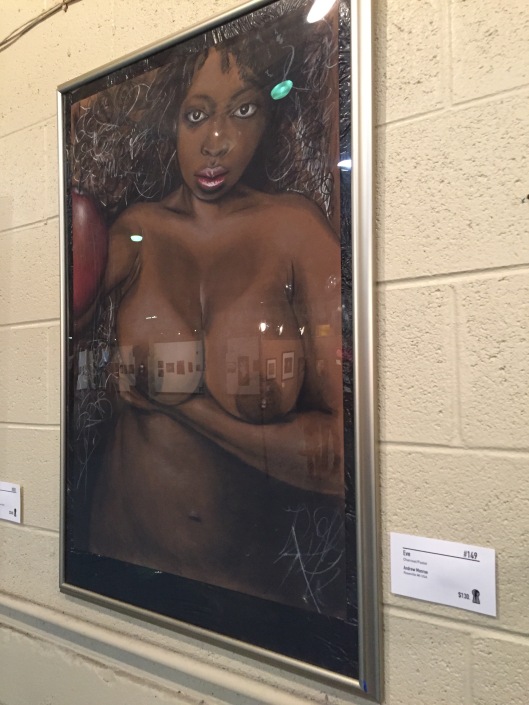 It’s a charcoal and pastel drawing of a nude African American woman holding an apple out. The apple in her hand echoes it’s curves to her curves and it’s color to the color of her lips. The pictured Eve is a mature depiction of a lady both with her robust stature and the hints of grey in her hair. Then you notice the grey streaks in her hair are actually words, signatures and letters signifying to me knowledge and wisdom.

I’m really impressed with Eve and I would buy it if I had room to display it.

Not everything on display was huge I really kept my eyes out for miniatures. My favorite set of miniatures was #NSFW 1-6: Are you following me? By Carie Musick 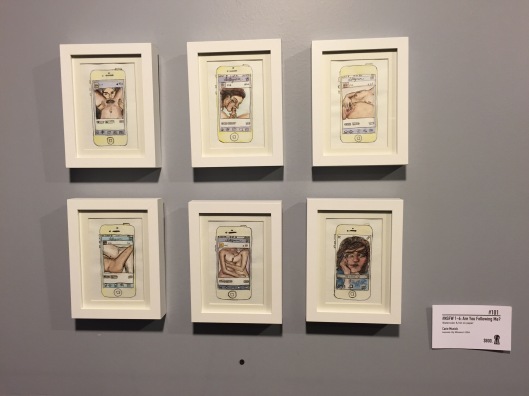 I loved the quirky analog versions of a most digital phenomenon. It’s a set of intimate snapchats which should be as transient as a snowflake in the summer sun. The effort put into the water color depictions gives an extra level of intimacy and permanency not only to the images but also the relationship behind the images. This makes me ponder the work and maybe it has a deeper meaning like people are not as disposable as phone aps???

I would like to own this but alas it is out of my budget.

I would like to say thank you to all the artists who participated in this years Dirty Show, I found the exhibition very enjoyable.

I would also like to say thank you to the person who may have bought my art. I feel strangely satisfied that someone else sees beauty in some of the same things I do.