Whoot Whoot this is post #300 of my blog “Adventures with My Camera” So we’re going all multimedia and stuff.

I blame Netflix for the inspiration for this image edit ;0) I recently found “Le voyage dans la lune” in my Netflix queue. Which is an awesome 1902 silent movie about a trip to the moon and a battle with the lobster people of the moon.  Well that movie got me watching other Georges Méliès movies (or parts of them ) and more recent derivatives like Scorsese’s Hugo which has a sub plot involving an aged Georges Méliès.  I then started breaking out to other Black and White movies like “All quiet on the western front” and “M” which brought me back to Fritz Lang  and his famous movie Metropolis. Which in turn took me to The Cabinet of Dr. Caligari 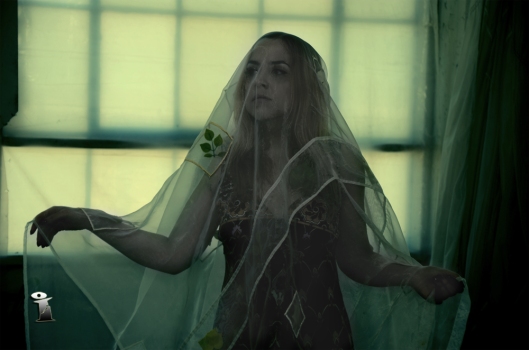 Now old silent horror films are great for inspiration heck  Joseph Kahn and Rob Zombie used The Cabinet of Dr. Caligari as a template for the music video of  The late 90’s song Living Dead Girl.

Which is part of the inspiration for my edit.  If you notice the image has color but Sadie S is more black and white. The gauze over her face ls like a shroud and that helps with the dead imagery, while the arms out goes for the living. Hence Living dead girl.